Lyft IPO: A bet on things staying the same?

Lyft is preparing its IPO. The ridesharing giant, dwarfed only by its counterpart, Uber, is said to be eyeing a valuation between $20 and $30 billion. Uber, whose IPO will likely be happening later this year is said to be valued 4x higher, at approximately $120 billion.

As Lyft revealed its financials ahead of its upcoming IPO, it has become clear that no definitive path to achieving profitability has been carved out. Given this lack of a clear way forward, the performance of Lyft’s stock will effectively reflect the markets’ opinion of the ride-hailing market, and, by extension, of the future of mobility in general.

Both Lyft and Uber are money-losing businesses. Unsurprisingly, in the cash-burning era of Elon Musk, this is not considered a major drawback. But can Lyft leave the red and become profitable? According to Crunchbase, Lyft may be on its way to profitability. It has certainly grown over the past two years – Uber’s scandal-riddled 2018 and a huge marketing effort saw the ride-hailing company grow fivefold within two years. And although losses climbed to a net $911 million during 2018, Lyft’s overall growth meant that last years’s losses represented a much smaller percentage of its yearly revenue compared to previous years. 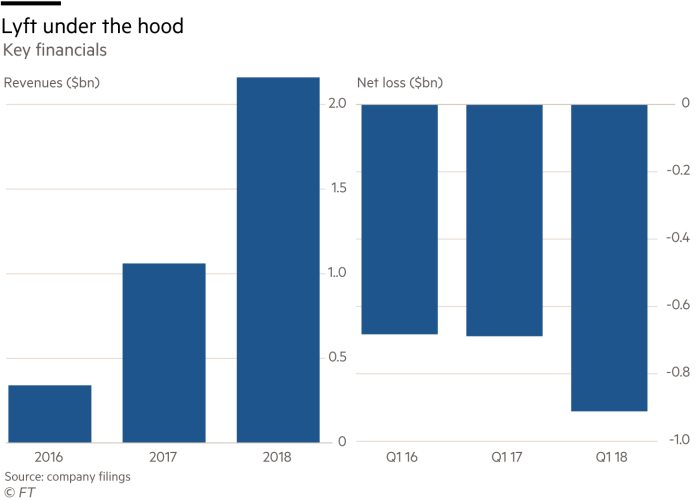 As Reuters (and Lyft’s recent filing) has revealed, Lyft experienced a staggering $911 million in losses for 2018. What may not be immediately visible, though, is that this figure is not as shockingly bad as it initially seems. Some further context is useful: Lyft’s losses for 2018 are equivalent to approximately 45 percent of its yearly revenues. It suffices to say that Lyft’s losses in 2017 and 2016 represented 70 percent ($688 million) and almost 200 percent ($682 million) of its yearly revenue respectively. Although the fact that the company is still burning through cash is not ideal, the shrinking of its losses as a percentage of its yearly revenue may be a sign that Lyft is becoming efficient enough to potentially turn a profit in the future.

Another metric that will be of interest to potential investors is that growth of the overall market. According to Goldman Sachs, the ride-hailing market is expected to grow from $36 billion today to approximately $300 billion by 2030, as its main competition, the taxi market, shrinks to a quarter of its size over the same timeframe. Apart from the erosion of the classic taxi-model, a trend against car ownership is further kindling the growth of ride-hailing. The question that will be on investors’ minds, though, is not necessarily associated with the market’s overall growth. Rather, investors should be asking whether Lyft’s current control over 30-40 percent of the U.S. ride-hailing market is sustainable, as ride-hailing is radically changed by the adoption of self-driving technologies.

A MARKET THAT IS GROWING . . . AUTONOMOUSLY?

A hurdle that Lyft has to overcome with regard to its potential growth is the rise of autonomous vehicles. Although not as close as people suggest, the rise of autonomy could have a detrimental effect on companies that do not promote a definitive plan towards achieving autonomy. In 2016, Lyft’s CEO, John Zimmer, claimed that most of the company’s rides would be autonomous by 2021, yet it does not seem like the friendly giant of ride-hailing is close to achieving such a feat.

Interestingly, the ride-hailing industry may be facing competition from forces that were previously unreckoned. Alphabet’s Waymo, for example, recently launched Waymo One, an autonomous ride-hailing service. 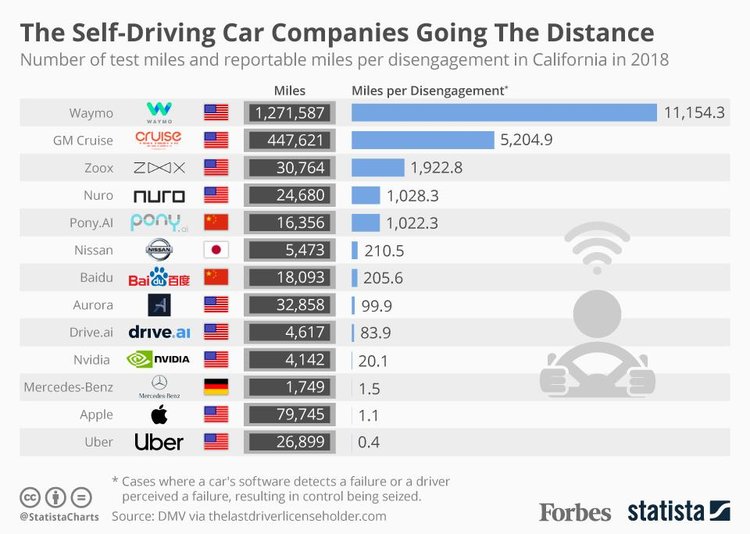 Although the service is only available in Arizona at the moment, it will not be long before it is unleashed into the rest of the United States (or, the world). Furthermore, in spite of the use of a safety driver on every Waymo One ride, it is clear that Waymo is way ahead of its peers in the race towards truly driverless ride-hailing – it would not be surprising to see unmanned rides hauling passengers around within a year. Waymo has already secured a permit from California’s Department of Motor Vehicles to test unmanned vehicles, after all. With General Motors estimating the cost of drivers (for Lyft and other ride-hailing companies) at $3/mile, it is not hard to see how profitability for Lyft must be driver-free.

With autonomy dictating the pace of change (and, presumably, the level of investors’ faith in Lyft), Lyft has an uphill battle to fight. Admittedly, the direct competition is not doing much better: Uber’s Advanced Technologies Group, responsible for developing self-driving vehicles for the ride-hailing giant is not really a leader in its field: after a fatal car accident involving a pedestrian forced the company to suspend autonomous testing, Uber recently restarted its testing operations. Yet, its performance is considered abysmal compared to the frontrunners.

Lyft, whose in-house autonomous driving programme is keeping a low profile, has struck deals with various leaders of the field, such as Waymo and General Motors. In a bid to develop some in-house expertise, Lyft recently acquired Blue Vision, a London-based startup developing AR technology which is expected to help Lyft with its autonomous driving programme. But is this too little, too late? While partnering up to deliver driverless rides may seem like the logical next step for Lyft, given its seeming lack of in-house expertise, investors may ask one important question: will the deep-pocketed competition have any real incentive to partner up with Lyft or will Lyft have to rely on itself to deliver autonomous rides?

IF NOT RIDE-HAILING, THEN WHAT?

Lyft is a ride-hailing giant that commands 30-40 percent of the United States ride-hailing market. Interestingly though, its reach stops there.

The company recently acquired Motivate, becoming the largest bike-sharing provider in the United States. Although bike and scooter sharing is gaining traction in the United States, Motivate has not been a major revenue contributor for Lyft; at least, not yet. Accordingly, no specific breakdown of Motivate’s financial performance was provided, although the company reportedly made $100 million in revenue before its acquisition by Lyft. Indeed, as much steam as bike and scooter sharing schemes may be gathering, they are still part of a nascent industry that is fighting to become profitable (and often fails, as the downfall of companies like Ofo revealed).

Most importantly, what Lyft is lacking when juxtaposed with its main competitor, Uber, is a diversified portfolio. Even ignoring the need to embrace the transformational force of autonomous driving, the competition is doing more than Lyft. Indeed, while Uber is similarly active in the bike and scooter-sharing business (through Jump), it has also branched out to other lucrative businesses. Uber Eats’ booming popularity is a guarantee that Uber has more ways to grow than mere transportation; Uber Freight and Uber Elevate allow Uber to leverage its expertise in transportation further in order to remain relevant in the changing transportation landscape.

Finally, Lyft is also lacking geographically. While it commands nearly 40 percent of the North American market, it has not yet expanded to other jurisdictions. While focusing on a market that is close to becoming profitable may be considered a wise move, it also creates a dangerous situation for the ride-hailing company. The American market is almost always the go-to testing ground for companies that want to launch their new ventures. Indeed, if Waymo One is joined by other robotaxi services, one could see a future in which the first movers into the U.S. robotaxi market do to Lyft what Uber did to the taxi industry a few years ago. The danger of expanding into new geographical markets cannot be understated: Uber faced stiff competition abroad, having been sent packing in huge markets, such as Russia, China, and Germany. Then again, Uber has also reaped benefits from its international expansion: Argentina is reportedly Uber’s fastest growing market and India has been hailed as a source of “major growth”.

A bet against change

Lyft has filed its S-1, which means it could go public as soon as April. The transportation industry is changing: car ownership is past its peak; self-driving cars and shuttles are bound to change not only the way we move, but also the way we build cities; major cities are passing legislation encouraging greener means of transport, like bikes and scooters; and developing countries are embracing ride-hailing. Yet, in this rapidly changing market, Lyft’s IPO is a bet on things staying the same long enough for the ride-hailing company to capitalise on its U.S.-based business. Will investors give Lyft the cash it needs to further establish itself as the go-to ride-hailing solution and will the company pivot fast enough to proudly look the competition in the eye?

Andrew Kyprianides is a Cyprus-born individual who completed his Law degree at King’s College London in 2015. After graduating from a Master’s in Public Policy at Harvard University in 2018, he decided to focus on a rapidly changing part of the commercial world: mobility. Through his website, themobility.club, Andrew explores the developments in all things directly or indirectly related to mobility – autonomous vehicles, ﬁrst/last-mile transportation solutions, AI, Waymo, Cruise, Tesla, curb space data, patents, regulation, and city planning, among other things.

themobility.club
themobility.club is a platform which allows readers to stay in touch with the latest mobility-related developments in various ways: the integrated Twitter feed provides instant updates on what is happening at the moment, the Daily articles provide an overview of what happened throughout the day, and the in-depth Spotlight articles allow a deeper understanding of the latest headlines. The weekly newsletter of themobility.club oﬀers a quick way to stay in touch with the most important news of the week.